London at Christmas is, by far, the most magical place on the planet. Since visiting I have developed a deep and unwavering love of how the English flawlessly pull off this widespread holiday. I’m nearly convinced there is no actual North Pole, but instead Santa holds up in a little shop on a side street of London. Between the lights along Regent Street, The Eye, the Museums lit up at night and every single square inch of Harrods there is really no comparison to anything I’ve ever seen before; Or smelled for that matter. On Westminster Bridge there is always someone selling roast chestnuts and the moment I laid nostrils on them I would have sworn I’d never smelled anything so scrumptious.

In North America, Christmas seems to be ALL about the commercialism, the shopping, the spending, the economy boosting power of women with credit cards and men with no time so will essentially buy anything. We just survived Black Friday and here in Canada, and although it’s not the crowd control nightmare that it is in America, I still don’t like going within a mile of any major shopping centre. I won’t dwell on the details of this strange and unnecessary tradition because frankly, it’s stressing me out. Bottom line is the ‘Holidays’  here are not so much about giving people time off to spend with their family and loved ones. They’re about long hours, out-doing both yourself and others around you, and stress in general.

While in London and its’ surrounding boroughs during the weeks leading up to Christmas, I felt a certain magical charm that came from somewhere in this city. Whether it was the meat pies in shop windows, Christmas puddings on display, a light and magical snowfall, subtle twinkling lights on everything or just the general cheeriness of everyone about, it was so lovely I swear my heart grew three sizes and I genuinely felt the true meaning of Christmas.

So now, every year I scramble around, desperately trying to find that feeling again. I walk the streets at night, I peer into all the shop windows, I brew all the mulled wine, cider and hot chocolate I can get my hands on, but something about it all is missing. There is a London factor that’s been absent from my Christmas’s for the past few years, and no matter how hard I try to infuse it into this culture, I am simply unable to recreate it.

It may just be magic after all. 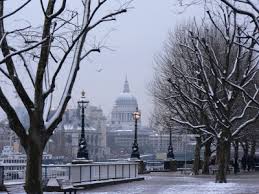